Sundays tend to be a generally slow day for news, but yesterday afternoon The CBC announced that their relationship with Jian Ghomeshi had come to an end.

The announcement left the internet in a state of shock. Ghomeshi is the host of The Q, CBC Radio’s flagship show. He is also one of their top personalities, having worked for the broadcasting company for 14 years.

“The CBC is saddened to announce its relationship with Jian Ghomeshi has come to an end. This decision was not made without serious deliberation and careful consideration. Jian has made an immense contribution to the CBC and we wish him well,” the network said in a statement.

Social media was abuzz with questions about what had caused the sudden dismissal. But some, particularly women in the Canadian arts and media scene didn’t appear to be surprised at all. 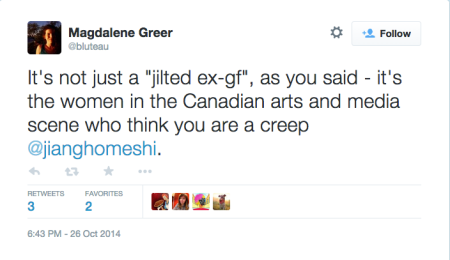 A few hours after the news broke Ghomeshi posted a long message to fans via his Facebook page.

“I’ve been fired from the CBC because of the risk of my private sex life being made public as a result of a campaign of false allegations pursued by a jilted ex girlfriend and a freelance writer.”

In the statement Ghomeshi further claims that his aggressive, but consensual, activities in the bedroom had led to his sudden dismissal.

Soon after it was announced through his legal representation Dentons Canada LLP, that a $50 million dollar lawsuit would be filed against the broadcaster claiming “general and punitive damages for among other things, breach of confidence and bad faith.”

Fans of Ghomeshi quickly rushed to his defence on social media, offering words of support.

But the cover story of the Toronto Star Monday morning offered a different version of events as Reporters Kevin Donovan and Jesse Brown released the details of an investigation spanning several months.

Three young women interviewed by The Star, have claimed that Ghomeshi allegedly physically attacked them on dates without consent.

One of the women involved claimed while visiting Ghomeshi at his Toronto home, she was struck by the media icon with an open hand, he then allegedly continued to hit and choke her.

All of the women involved chose to remain anonymous due to the fear of public backlash coming forward may bring. None of the women filed police reports for the same reason.

So much has been said, and more is sure to come. But one thing is clear shots have been fired from both sides.